The American India Pale Ale, or American-Style India Pale Ale has become one of the most popular, widespread, and brewed beers in North America. The rich pale malt backbone found in the depths of an aromatically bitter and hop-crisp beer has enchanted people all across the continent. There is only one problem with this – there are probably close to 1,800 breweries in NA, and there are probably about 2,000 different Pale Ales! The Pale Ale craze is becoming a bit overwhelming; whether it is an IPA, Pale Ale, American version or a hybrid, there are just too many pale ales out there.

So what’s a beer lover to do!? Well, obviously taste them all and find your favorites. Because that may take to long, I’m going to start you off in the right direction with one of the most well rounded and best constructed American IPA’s on the planet. The Bell’s Two Hearted Ale. Too many pales are either one sided, to aggressively hopped, not hopped enough, or are poorly built. The Two Hearted Ale is at the top of my list because it hits all the right notes in perfect harmony. It doesn’t get carried away with this or that, it is just plain good.

Don’t let the fish on the label or the awkward name sway you away from this beer. The Bell’s Brewery in Kalamazoo MI has been brewing some of America’s best craft beer for 25 years. They are one of the staples of Craft Beer in the North East United States, and produce masterfully crafted beers all year round. Just this year they began a $52 million expansion plan on the brewery!

The Two Hearted Ale comes in a 355ml bottle at 7% abv. I opened it cool around 8C (45F) and poured it into a stemmed beer glass. The pour was gentle and smooth showing only hints of life as the beer crashed into itself. Quickly though a rumbling of white foam began to collide with the glowing amber golden beer and a lush and pillowy ivory white  head was build close to 2 inches above the beer. It showed a smattering of tight and loose carbonation with sturdy bubbles and great retention. The beer was a beautiful sight, glowing a golden orange hue with copper and straw colors beaming through it. Bright shades of orange and apricot peer from every angle of the beer. Lightly opaque, but perfectly clean it was a masterful creation.

This beer has been build exclusively with Centennial hops from the Pacific Northwest, and if you take a deep breath of this beer you will understand exactly what this hop variety stands for. Big floral aromas of spice, pine and citrus perfume out of the beer cleanly and effortlessly. Smooth pale malts show creamy and soft malt character, hints of caramel sweetness and gentle warmth. The hops are the big winner here though with bright earth, grapefruit, lemon zest and fresh aromas. It is hugely aromatic and perfectly clean.

Thankfully, and without disappointment the mouthfeel and flavor reflect the nose perfectly! The first smooth and creamy rush of Two Hearted glides over your tongue and cheeks enlightening your senses with the fresh and lively flavors of centennial hops. Zesty fresh grapefruit, lemons, pine needles and earthy fields bring a quenching and massively refreshing crisp spice to your palate. It is perfect.

Pale mats are gentle but deep enough to provide the perfect backbone to this beer. Sweet candied caramel and zesty candy fruits are packed in the center of this beer allowing the fresh bitterness to play without being overwhelming. The sweet and crisp sensations of freshly squeezed grapefruits power into your palate with a tight and floral flavor that force your palate into refreshing submission. Again, pine and earth balance off the citrus and herbal flowers make a triumphant finish.

The smooth and lightly carbonated mouthfeel balances off the beer rightly, and shows soft creaminess and a touch of crackle. The end of this beer is again, a masterpiece. It is quick and agile, finishing with fresh quenches and sweet spicy notes of citrus and earth. Pale malts again sweeten out the end and round off a beer that is maybe perfectly built. That is the real power of the Two Hearted – it is one of the most balanced, best constructed, and most easily consumable Pale Ales on the planet. And it is available in 6-packs year round. 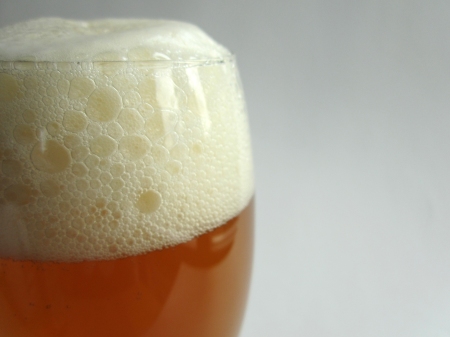 This entry was posted on Tuesday, October 5th, 2010 at 11:06 am and is filed under Beer Tastings, Game Changers. You can follow any responses to this entry through the RSS 2.0 feed. You can leave a response, or trackback from your own site.